Legal rights for a widow with no will in india

Legal rights for a widow with no will in india 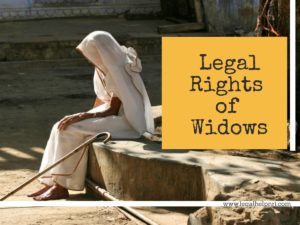 The law relating to the legal rights of the widows can be classified into two categories- (a) law applicable to Hindu, Buddhist, Jain and Sikh (b) law applicable to Muslim, Christian Parsi and Jew. The Hindu Succession Act, 1956 is applicable to the first category for the division of wealth of a person dying intestate (dying without leaving a will). The distribution of the property of a male Hinduis done in accordance with section 8 and 9 of The Hindu Succession Act, 1956. Accordingly, the property woulddevolve upon his Class I heirs who take the property simultaneously to the exclusion of all other heirs. If there are no Class I heirs, property devolves upon Class II and if there are no Class II heirs, to agnates followed by cognates. A widow is a Class I heir and therefore has a legal right in the property of her husband who died intestate. She has a simultaneous right in the property with other Class I heirs (if any). A widow or if there are more than one widows, all the widows together take one share whereas the surviving son, daughter and mother take one share each. Example- if a Hindu male dies intestate leaving behind two widows and a son, both the widows shall get one-half (which will be divided equally) and the son would get the other half.
Muslims are governed under The Muslim Personal Law (Shariat) Application Act, and Christians, Parsis and Jews underIndian Succession Act, 1925.

Is a widow a legal heir of husband?

After death of husband,his wife,children and mother are the legal heirs as per Hindu succession act.If the husband died intestate,his legal are as stated above and all his properties will devolved upon his class 1 legal heirs.

Does a widow have a right on the property of their deceased husband?

A widow does have rights over the property of deceased husband.

Can a widow claim ancestral property?

Yes, under The Hindu Succession Act, 1956, the property of a Hindu male dying intestate devolves, in the first instance, equally on his sons, daughters, widow and mother.

If a widow remarrying can she claim her share from deceased husband?

Widow upon remarrying cannot claim any share in the property of her deceased husband. According to the Act all rights and interests which any widow may have in her deceased husband’s property by way of maintenance, or by inheritance, shall be cease upon her re-marriage.

Can widowed daughter in law claim maintenance from her father in law?

Yes, the Father in law is liable to pay maintenance to the daughter in law under Section 19 of Hindu Adoption and Maintenance Act, 1956.
A widow, whether married before or after the commencement of this Act, shall be entitled to be maintained after the death of her husband by her father in law.

What are daughter in law’s rights over in law’s self acquired property?

Courts have also ruled that a widowed daughter-in-law has no right over the property which is a self-acquired by her parents-in-laws.

Who are the legal heirs of a Hindu widow?

Delayed PossessionIndian EconomyLegal services
Monnishaa Mahajan, Principal Attorney at Legal Help NRI. Monnishaa has an experience of more than 15 years in assisting and advising NRI's in resolving their disputes in India.